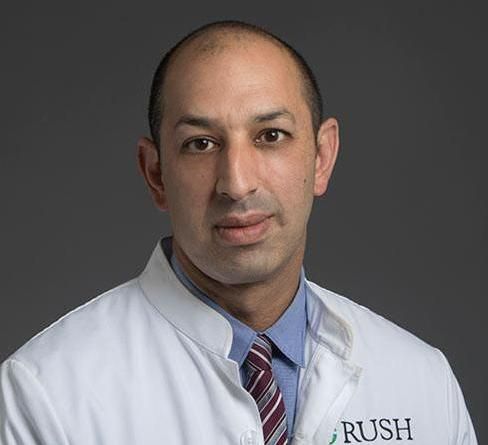 Omar B. Lateef, DO

CEO, Rush University Medical Center
Omar Lateef, DO, became the CEO of Rush University Medical Center in May 2019. He was the chief medical officer of the Medical Center and of Rush University System for Health from January 2015 and June 2018, respectively, through June 2019. As the Medical Center's chief medical officer, Lateef helped design, implement and oversee Medical Center initiatives related to clinical quality, patient safety and performance improvement. Under his leadership, Rush system hospitals performed exceptionally well in rankings by the Centers for Medicare and Medicaid Services (CMS), U.S. News & World Report, the Leapfrog Group and Vizient, which in 2018 ranked Rush University Medical Centersecond among 99 participating academic health systemsacross that nation in quality and accountability. Lateef is a recognized leader in the measurement of health care quality, and has worked with physicians and analysts at Rush and from academic medical centers across the nation to evaluate the driving factors and methodology for quality rankings by CMS,U.S. Newsand others. Lateef and his colleagues have evaluated and recommended changes to the rating systems to confirm that they are accurate and a fair reflection of quality. His work to ensure that key national measures are transparent, measure what they are intended to measure and have no unintended consequences has profoundly impacted how health care quality is viewed and reported at Rush and across the country. Lateef, who joined Rush in 2002, was appointed associate chief medical officer in 2009 and vice chair of theDepartment of Internal Medicinein 2012. He also served as program director for the Pulmonary and Critical Care Fellowship Programand as director of the medical intensive care unit.A former associate dean of medical sciences atRush University, Lateef is currently a professor of pulmonary and critical care medicine. He has won numerous teaching awards at the University and led educational programs that ranked repeatedly among the top five in the country. In 1995, Lateef earned a bachelor's of science in religious studies from the University of Florida -Gainesville. Four years later, he received his medical degree from Des Moines University, after which he completed his internship and residency at New York University Downtown Hospital. He completed a fellowship in pulmonary and critical care medicine at Rush in 2005. Lateef has published extensively on scientific and ethical issues in critical care medicine and spoken internationally on improving health care and its delivery. He is a member of the American College of Chest Physicians, the American Thoracic Society, and the Society of Critical Care Medicine, and a fellow of the American College of Physicians.
Sessions
View all Speakers